On Norman MacLean’s beautiful written canvas, life is viewed through a lens focused on contemplation and life related to fly fishing on the rivers that flow down from the eastern Rocky mountains. MacLean’s father was a minister. He spoke of all Christ’s disciples being fisherman on the Sea of Galilee and left his boy’s to assume that the disciples were all fly fisherman and the favorite, John, a dry-fly fisherman. 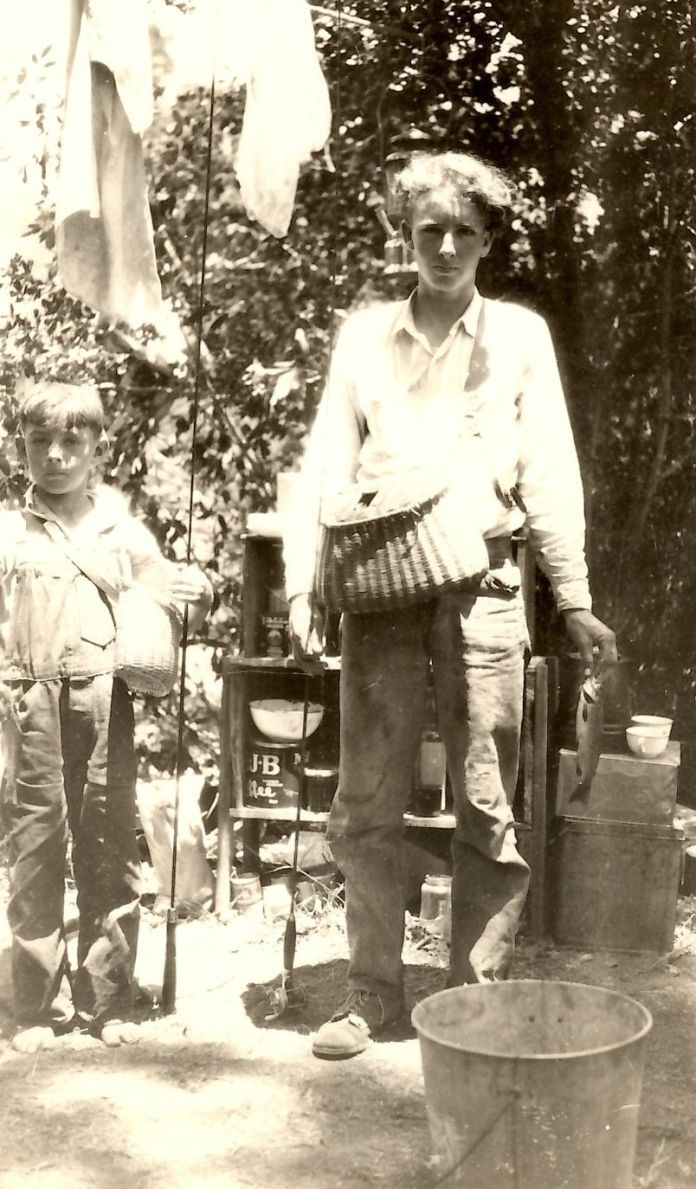 And so it was in our house. My father George and his older brother Jack were raised in a time when boys had the free run of the country and fishing the creeks of the Arroyo Grande, Stoney Creek, The Lopez and such elegantly named spots as Huff’s hole was their delight. We grew up on tales of the Rainbow,  Golden, Cutthroat and Brown trout, coaxed from their cold lair beneath the riffles of the San Joaquin, Kaweah, and Kern rivers. We heard stories about how it was camping and fishing around the meadows of Dinkey Creek, named for a dog  who bit and held on to the hind leg of a charging  Grizzly, giving time for the ranchers to grab their rifles and kill the rampaging beast. The creek and the area around what is now McKinley Grove were named in honor of the bravery of this little dog, “No bigger than a rabbit.

The Holy Grail, though, was the mighty Kings River and particularly the deep, dark gorge of the middle fork. The middle fork rushes down a 37 mile long, very deep and narrow  canyon to its confluence with the South fork to form the main stem of the Kings.

Confluence of the South Fork and the Middle Fork, Kings River.

My dad and uncle started going there in the early 30’s and were still doing so when I was a boy. The tales they told of fording the river, bone chilling cold even in the early fall when the water was sometimes low enough to ford seemed to me to be akin to the adventures of the bravos who roamed the west before it was tamed. My dad told of tying a rope around his waist and swimming across, being swept downstream for a hundred yards before making the far bank. Up the canyon, beneath the 1800 foot cliff known as Valhalla, which my dad always called the Waldorf after the hotel in New York, they would make camp under the willows on a nice sandbank shaded by huge granite boulders. In the darkness before dawn, coffee brewed in a can on a small fire woke you enough to get on the river before the sun was on the water. As the fly hatch began in the warming sun, providing breakfast for the trout, they  fished up the river toward the Gorge of Despair below Tehipite Dome.

The Canyon of the Middle Fork.

This was before the time of fancy camping rigs. They each took a simple rucksack stuffed with some loaves of bread and jars of peanut butter and jelly, one frying pan, a jar of butter for frying fish and salt and pepper. Tie on a sleeping bag, battered old tin canteen from WWI and what else did you need?  Rubberized waders, nope, too heavy. Hiking boots, not likely, Old high top tennis shoes gripped the wet rocks better. Creels, maybe, but it was cloth, not wicker. You just needed a small round tin to put your flies in, some extra leader and a pocket knife. The only expensive and cherished item was the pole. Incredibly slim and tapered to a fine point, the silk wound bamboo fly pole was and is one of mans most beautiful creations and in the hands of a master fisherman, a thing to behold. My father was such. Even after a lifetime of farming, working with hands scarred and thickened by heavy work in all kinds of conditions he could make his fly rod sing in a ballet seldom equalled.

I made my first trip at thirteen. The Model T was long gone of course, but not much else had changed. The gear and the provisions remained the same and I have to say that peanut butter and jelly are hard to beat after a long day in the sun hiking, first down to the river from the road at Cherry Gap, crossing the South fork of the King’s to get to the trail head where you begin the long trek up the middle fork, walking old miners trails along cliffs 500 feet above the river below. In the late fifties none of the trails were maintained by the forest service and could be really rough and treacherous after a long winter covered in snow and ice. 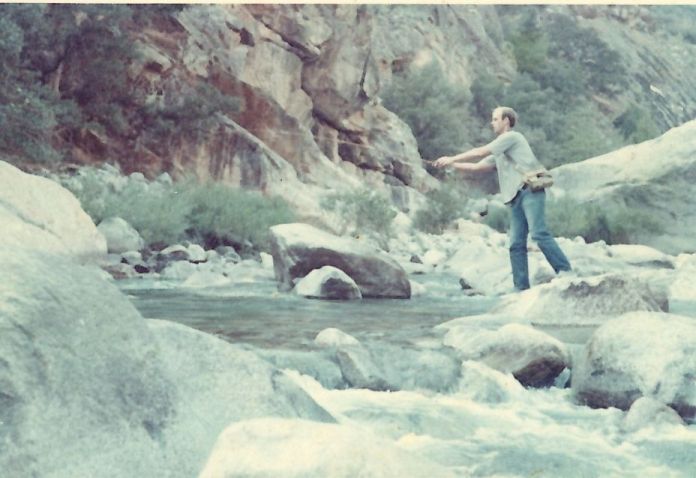 I made my bones on this river, learning to roll cast under the willows that lined the river, never letting my shadow show on the water, always working upstream so as to leave no scent for the fish waiting patiently in the deep water under the massive boulders where the river eddied, sweeping a fishes dinner right to his doorstep. You had to make the dry fly dance, skip and hop along the surface to fool these fish, they were the ultimate quarry, native, raised on the river, never having been fished before. Some years there was absolutely no evidence of any other human being having been up this canyon.  In all the years I fished with my dad and uncle Jack,  we never saw another human being.

We made our last trip together in 1967. My father and my uncle grew too old and I, I went off to new adventures in other places. Looking back on those times I can’t help but think of what I have lost. It seems to me that all of the best memories of family deal with some kind of loss, don’t they?

We lay half under the willows a night sheltered and warmed by the gigantic granite boulders radiating the heat of the day, looking up at a sky with no hint of light other than the billions of stars visible between the soaring granite peaks above. There, there in the center, the Milky Way, the great crossing over bridge to journeys end where my father has gone.

Sometimes it’s as if life has been made and not happened.