Time is a human invention. We just made it up. It was for grown ups when I was little, though not in ways you might recognize today.

Cakes. My mom could make a great cake and she marked the passing of the years with them. Each year was a candle. She did this every year until she died. Your first perception, that passages were marked, came from these, those cakes with their ever increasing candles. 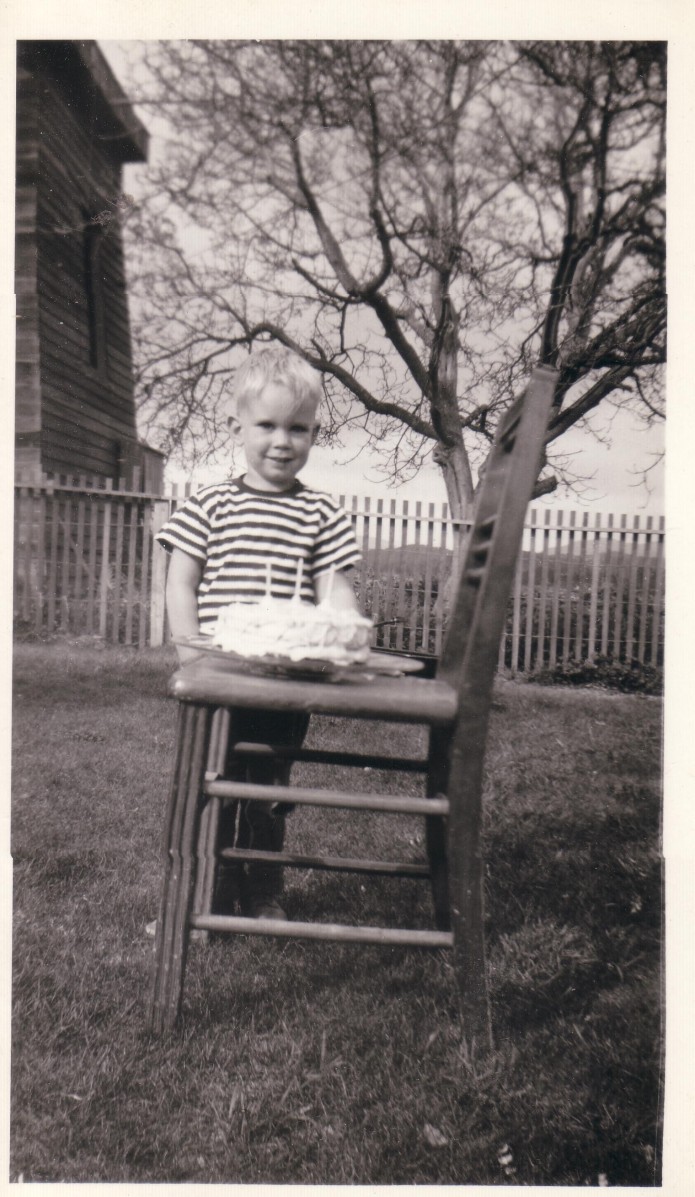 My dad had a wristwatch but he didn’t wear it to work. With his hands in the irrigation water or working around machinery it wouldn’t have lasted long. A lifetime of getting up with the cows was enough. Each day before dawn he would be sitting at the kitchen table, coffee cup warming those hands, listening to the mornings crop report on the radio. You might remember those old vacuum tube radios, a chocolate brown Bakelite case with a round dial for finding the station you wanted to listen to. The speaker was covered with a hard coppery fabric that looked as if it was made from WWII surplus torpedo nets. The whole thing was indestructible. It was  that particular time before the veil of planned obsolescence descended on us. If it quit, you could fix it yourself. Goodness, my dad knew how to build a radio. It’s what kids did in the 1920’s. If you recall all the prison camp movies of the world war, the americans always built a radio, almost literally from thin air. Sergeant Schultz could never find it either.

Time wasn’t defined by lines and figures on a clock face or by blinking blue numbers. Yes, you could listen to the Naval Observatory time hack beamed from WWV radio in Fort Collins, Colorado if you must know the exact time but other local factors did just as well.

The little schoolhouse we went to was about a mile from our house. Every school day, the teachers went into the hallway and pulled the bell rope at 7:30, signaling kids and parents all over the valley that it was time to get ready for school. The second bell warned that classes were about to begin. On Sundays we could hear the old churches in town pealing the call to prayer. Keeping time like this was essentially unchanged from the time in the 11th century when the first bell towers were built. Fifty years before I was born, you would have heard these bells pealing from the little schools all over the valley. Our school, Branch, was the last, as they took the bell tower down in the middle fifties. The same time that I got my first wristwatch, a for real, Davy Crockett.

At one o’clock sharp, the mail plane flying from the old army air field in Santa Maria to the San Luis Obispo airport passed over our farm, Douglas DC 3’s hauling the mail and telling the workers who ate in the fields that it was time to get back to work. It was, except for the crop dusting bi-planes, just about the only aircraft we ever saw. Not only did it tell time, but reminded us that there was a world far away that we had never seen. Occasionally a letter would come, written on a blue, folded, almost tissue paper thin envelope with an address from a far away place and we understood time could be measured, not just in minutes, but in distances. We imagined.

The SP ran just before the sand dunes in the little town of Oceano. The railroad still ran a full schedule of trains then. Freights, vegetables and passenger trains like “The most beautiful passenger train in the world,” the Coast Daylight that roared through the little town at two o’clock, the big orange and black GS-4 locomotive thundering past the old depot, the engineer laying on the steam whistle at the grade crossings. Grand Ave, Railroad Street, River Ave, 22nd St and all the other farm roads in the western valley. The steam whistle blasted the letter Q, Morse code, dot-dot-dash-dot for the “Queen” train. Some were musical artists in the way they caressed the pull rope, making the letter sing it’s lonesome song. These were ticks on the clock for us, marking time. The trains are still there, but the steamers are long gone and the diesels can only honk.

The most reliable clock we had was our tummy clock. Mom made our breakfast, dry cereal in the summer and “mush” in the winter. The winter breakfast rotated between Cream of Wheat and Quaker Oats. It seemed different every day, for our mother was of a generation that didn’t rely on the measuring cup. Sometimes it was slimy and starchy and maybe, dry and flaky, you just never knew. It set your clock for the day though. Wherever you were, playing in the yard, down the field, the creek or in the sheds, a growling stomach was a sure sign that you should run for the kitchen. Repeat for dinner.

Dad set our time too. He marked our clocks when he went out the back door to work, again at nine o’clock when he drove into town to get the Times and Examiner at Kirk’s Liquor. Sometimes we went too and he’d buy us a candy bar. Lunch came and went. They loaded the trucks and in the late afternoon he drove to the trucking company dock to unload. Our crops were then shipped overnight to the produce market in LA or SF. Checking the irrigation, moving the pipe, packing celery or broccoli, all steps around the daily clock.

We’ve grown up into a world where time is like a row of boxes that make up your day. This box at eight o’clock, that one at three. Time has sped up and at times is just a blur, like the windows on that passing Daylight. Right place, right time. I prefer the old way, it’s better for you.

Winter and summer, the sun tracked across the sky telling us the time by it’s angle above the horizon. My dad could tell time within a few minutes just by looking up.  We, his kids,  lived by daylight and the dark of night. Children run with a different set of hours. We weren’t yet tyrannized by the clock. Time was a vague and amorphous thing that still had little shape for us. In the winter we got up, ate, went to school and came home. In the summer, we got up, ate and then drifted from thing to thing like leaves on a pond, following the riffles of a breeze.