Farm families live in the mud. It’s a constant. The roads are dirt, the fields are dirt, there is always dirt. It’s in the house, particularly with three rambunctious boys flying in and out the door at all hours of the day. The farmer and his friends have it on their boots, it’s on the floorboards of the car and trucks, the tractors too. When the wind blows there are clouds of it. Even the dogs trail little dust clouds after themselves. 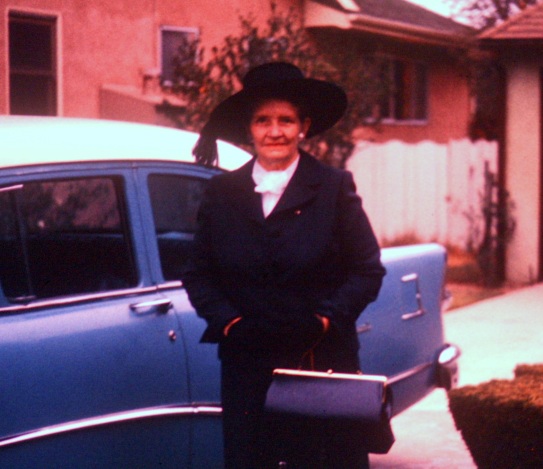 Grandma Hall, not a mudder.

Our farm was located in a small fertile valley in Coastal California. It spanned the narrow valley from side to side. From the cutbank on the east side to the creek on the west. The ground we lived on had been laid down by thousands of years of rain and drifting soil, deposited in the winter floods in a random fashion dictated by the amount and time of the annual rainfall. Before cultivation the little valley stream meandered from side to side in a vast Monte that stretched from the Santa Lucia mountains to the Pacific Ocean 21 miles away. Thousands of years of undisturbed growth had created a tangle of oak and sycamore trees, bound by willows, poison oak and wild blackberry vines that were nearly impenetrable. Only the Grizzly bear passed from side to side on narrow trails they had bulldozed over the centuries. When the first Spanish explorers passed through the area in September 1769 they had to pass along the beach, being unable to penetrate the swampy valley with their 100 mule pack train. The Arroyo Grande remained the same until, in the late 1830’s, the first ranchero, Don Francisco Branch arrived and began the laborious task of hacking a life out of what was still a wilderness. Cattle were grazed on the hills and the monte was attacked to create enough space in which to grow crops. Over the decades the Grizzly was eliminated, marauding Tulare indians were discouraged from stealing cattle and fields of grain and corn were planted. A noble adobe house was built on the Santa Manuela Rancho. A small school was established for the children of the ranchero and his employees. Branch’s school was eventually formalized and officially named after the ranchero. A grist mill was constructed on the upper reaches of the creek and the road leading to it was named Branch Mill because, simply enough, thats where it went.

When the old pioneer died, his properties were divided among his children and their spouses. Slowly the valley began to grow in population. The old Arroyo Grande, Santa Manuela, Corral De Piedra and Bolsa de Chamisal land grants were divided in smaller plots and sold to farmers and ranchers. The sections were subdivided over the years until most of the farm land was broken up into roughly forty acre plots. When I was a boy, nearly every farm supported a farm family, most of whom lived on the land.  Our farm was located on branch Mill road just about three quarters of a mile from the old adobe ranch house. Just across the road, about two hundred yards away was the old bear pit where Grizzly bears were captured in the early days.

Because, over time, the creek had meandered all over the valley, the type of soil on the  farm was varied. Near the road ours was a mix of adobe, sand and gravel. Near the center of the property it was adobe mixed with lighter soils to give it an almost perfect composition for row crops. Near the rear of the property, along the creek it had a very sandy texture.  In the rainy season each type of dirt became mud except for the sand. The sand just grew firm when wet. In summertime though it was just the opposite of the muddy winter, it grew soft and you could easily get stuck in it.

In winter we lived in a sea of mud. Slippery mud, sticky, slimy mud. Mud everywhere. When it was really wet the furrows of the fields were filled to the brim with water, looking, for all the world like enormous piano keys. Parts of our roads were lakes and our driveway was a trap for the unwary driver.

Mom could not keep the house clean. Mud was tracked in on muddy shoes and boots no matter how many rules about ” Take your shoes off! ” she had. We cleaned the soles of our shoes with kitchen knives and then baked them in the oven to dry them out for the next day. Slipping on a pair of high top shoes, curled and dried by oven heat was not a job for the faint of heart. Feet are not curled upward naturally and it took hours for the shoe to soften enough to be comfortable and by that time you had to do it all over again. Hopping from place to place, trying to stay out of the ruts in the driveway on the way out to the school bus was terrific exercise. We three boys must have looked like the Russian ballet, leaping about like farts in a skillet. There were rubber boots for the fields but they were all man size. Boys risked having them sucked right off their feet if they tried to take shortcuts across cultivated ground. Once I got myself in so deep doing that, that I lost both boots and had to crawl on my stomach across the mud to keep from being entombed, I’d have merely been a fossil when the ground dried in the spring. The rubber boots were never found.

Almost all the driving in the fields was by tractor. Two wheel drive pickups could get stuck and they tore the muddy roads up which, when they dried made for a bone rattling rough ride. One winter it rained so much and continually that the fields were too soaked to get even tractors in. The celery and brocolli crops around the valley had abandoned tractors and trailers in them that had gotten so stuck they couldn’t be driven out. No other tractor could possibly get in to do the towing either. The crops rotted in the fields. At the end of every winter, there would be the occasional truck or tractor so deep in the mud that they would have to be dug out.

Farmers knew where they could go. Some types of ground dried rapidly, some didn’t. There were places that looked dry but weren’t and were traps for the unwary. Sometimes wet pasture combined with a steep hill isn’t drivable. You get stuck in a swale and you simply cannot get out. Rubber tires just spin and smoke on wet grass, and try as you might, your pickup won’t go uphill.  A walk to the house to ask for help from your dad or uncle is embarrassing because you are supposed to know about those things.

We were third generation drivers. My grandfather began driving in his mid-twenties and never really got the hang of it. He grew up with horses and was a grown man before he learned to drive. When my grandparents married in 1908, they had their wedding picture taken in a photo studio, proudly sitting in an old high wheel car that still looked like a  buggy. Autos were still a novelty then. Dad said you could spit on the ground and my grandfather would get stuck in it. Believe me, you can’t make things like that up. My dad, of course began to drive as soon as his legs were long enough to reach the pedals of a Model T Ford. He and his brother ran the milk wagons for my grandparents dairy. They did this before school starting when my uncle Jackie was 14 and my dad was 12. It wasn’t unusual in those days to see boys driving at very young ages. If your kid could work that was one more employee you didn’t have to hire. I don’t know how old I was when I first got behind the wheel. I do remember just barely being able to touch the pedals of the old ’38 Chevrolet my dad used for a field car. I do recall how it lurched because I couldn’t keep my foot steady on the gas. I could steer just fine though, I had lots of experience with that from driving wheel tractors, but if you had been in that old Chevy with me you might have broken your neck.

I’ve heard people say, ” Why did people build those old farmhouses so close to the road? ” Mud was the answer. Our house though, wasn’t right on the road. We had to navigate a quarter mile of muddy sloppy road to get in or out and that was no mean feat. My father had one strict rule, “stay in the ruts” he would tell people. The reason for this was simple, the ruts were packed down even though they were often underwater. The mud that looked dry had the consistency of toothpaste and was treacherous for the unwary. Get off in it and you were lost, your car sliding inexorably off the road and into the fields where you sank and stuck fast. If you got out of the car, you’d sink over the tops of your shoes and you’d be stuck too. I don’t know how many times dad cautioned my grandma Hall or my aunt Mariel to do just that, but they would get stuck “just a sure as shootin’.” Now my dad was not given to swearing much, he wouldn’t say shit if he stepped in it, but he would stand at the kitchen sink, glaring out the window, watching them trying to navigate the mud just knowing they’d slide off the road before they got to the house. He’d be grinding his teeth and mumbling under his breath the words he wouldn’t say out loud, knowing he’d soon be out in the cold with the tractor, crawling under a car, his clothes covered in frigid, slippery mud, dragging the chain to hook them up and pull them out. To add insult to injury, people would simply sit in the car and blow the horn to get his attention. He was a man who was born to help others but these events really stretched his patience to the breaking point. Putting one of his boys behind the wheel of grandma’s big, old blue tank of a Buick, he’d skid the car into the yard then help her into the house just as nice and polite as you please and then he’d say, he always called his mother-in-law Missus, ” Missus, you gotta stay in the ruts.”

2 thoughts on “Drive In The Ruts”