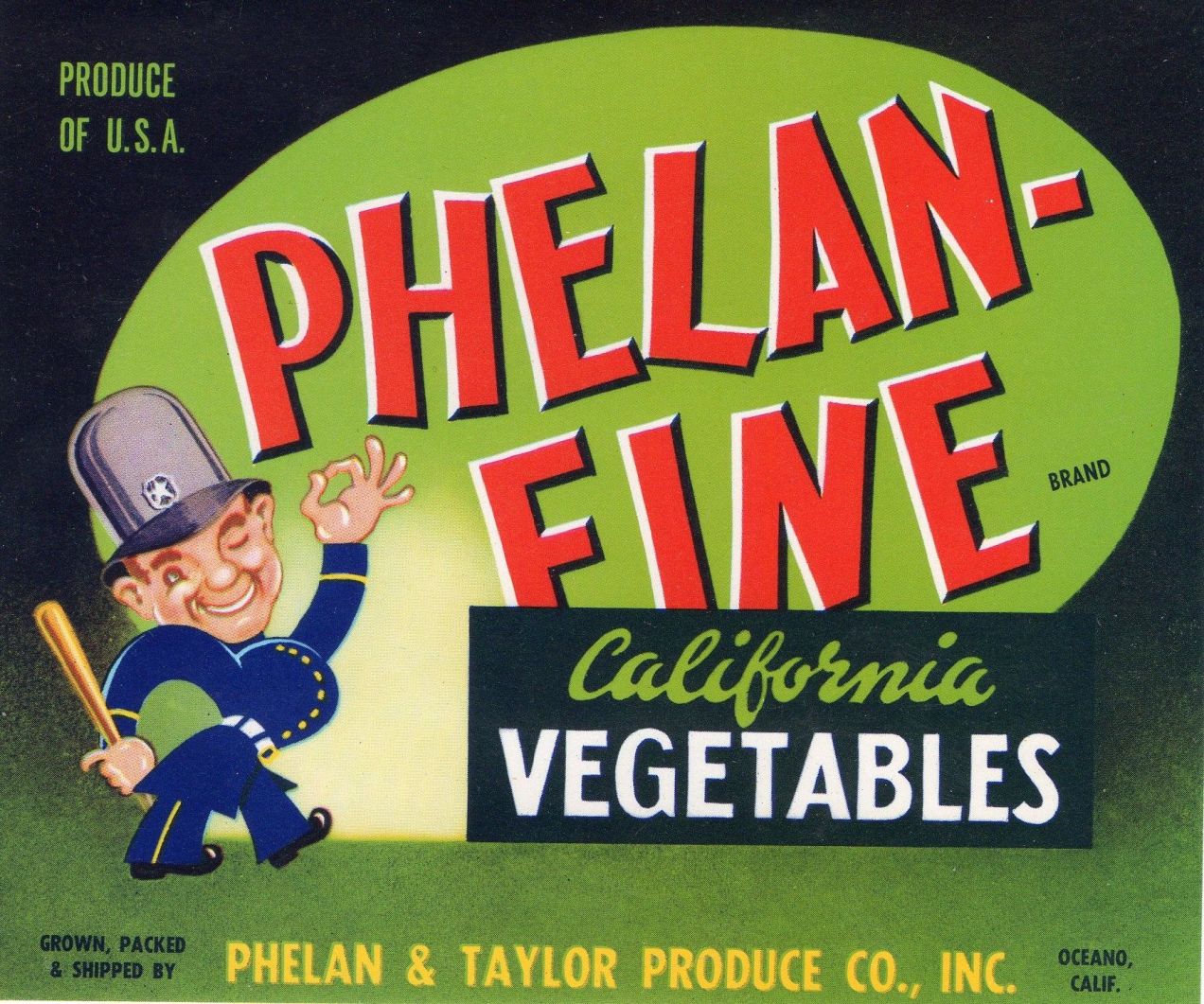 When I was a boy I used to ride with my dad whenever he went somewhere. It was part of my education. My favorite place to go was the box company in Oceano. Oceano is a little town built along the Southern Pacific tracks at the west end of the little valley I grew up in. In the fifties it was the center of the farming industry. The vegetable packing sheds were there, the big ice plant, very important in the days when freight cars were stilled cooled by ice and best of all the box company. It was in a large warehouse located right next the main railroad line and the sidetracks where the little yard goat steam engine shuttled boxcars around as they were filled.

My dad would head into the office of the box company to talk about ordering any of the different types of boxes produce was packed and shipped in. In the early fifties most vegetables were packed right in the fields or in sheds we had on our farm. He needed different kinds of containers for different crops. Crates for Lettuce or Celery, Lug boxes for Tomatoes or Flats for Chinese Peas. Inside the warehouse there were two main areas, one where finished boxes were stored, nested together and stacked clear to the rafters, leaving only narrow passage ways between the different kinds just wide enough for a man to walk through. Down the center there was a wide alleyway for the forklifts that did the moving. Parked here and there were big clamping handcart dollies with jaws to grip the boxes loaded on them. A man would load the dolly and then step on a pedal at the back and the jaws would clamp the bottom box so the load could be moved without sliding the whole load off. We would go over and jump on the foot pedal but even with the two of us we couldn’t make them work. A great disappointment.

At the opposite end of the warehouse was the place where the boxes were assembled. Great stacks of pine. all precut were placed on tables and nailed together. When the man finished his box he placed it on the roller conveyor, gave it a big shove and it spun away on the rollers until someone working at the other end end picked it up, placed it with other boxes in it’s nest where it was then moved into the stacks.

Best of all was the smell of the place. Nearly every box was made of fresh cut pine and the smell of the place was sweet almost beyond imagining. You could, and we did stand there and inhale the air and it seemed almost good enough to eat. The old heavy plank floors, worn smooth by decades of use were buttered with pitch and polished by the wheels of the forklifts which motored about moving tall stacks of boxes from the warehouse to waiting trucks ready to haul them out to farmers fields.

When dad came out of the office, order in hand he would holler for us and then have to chase us down in the labyrinth of crates. We always gave up in short order because we knew he had things to do and we wanted to be with him anyway.

Outside the box company there were steel rails to put pennies on, stray railroad spikes lying abandoned in the cinders along the rails and other divers and unidentified things that stimulated the imagination of kids.

Sometimes the little yard goat steam engine would be scuttling about, moving loaded freight cars from one place to another, busy making up consists which would be shuffled into place on the big freights that stopped every day. Dad gave us pennies to place on the tracks to be squashed by the little engine as it passed by. You were sure to get a wave from the engineer because he had been a kid too. His dreams of becoming a railroad man had come true so he knew what it was like for little boys.

When the Southern Pacific first came it was the main transportation hub along the central coast of California where we lived. Typical in type, it had a line of warehouses on one side of the tracks and the sheds where produce was delivered from the fields to be washed, sorted and packed for shipment.The big packing sheds were all the same with an office at one end where the salesmen and secretaries worked and the boss sat at his desk with his feet up and thought great thoughts, or so it seemed to us. The processing floor had conveyors and bins everywhere. The men and women who worked there wore rubber boots and aprons, some carried knives for trimming vegetables, that seemed faintly dangerous but, of course we all wanted to carry them too. A goal for nearly all little boys is to go heavily armed. The boxes all carried labels, colorful advertisements for the growers and shippers. Ed Taylor and Gus Phelan’s “Taylor Made” and “Phelan Fine,” Oceano Packing Companies “Oceano” label, Sal Reyes and Gabe DeLeon with its crossed Bolos reflective of their shared Philippine heritage and the Japanese growers POVE brand, Pismo Oceano Vegetable Exchange. The labels were stuck on the ends of the crates as they were loaded onto boxcars or semi-trucks headed for the Los Angeles or San Francisco markets. Some crops were shipped in used boxes with multiple labels plastered one over the other forming a virtual road map of the boxes travels.

Anchored at one end was the old depot building painted in the ubiquitous SP yellow and brown. In my grandparents day it was also a passenger depot. My grandmother and her family traveled to the bay area where her sister Sadie lived in Oakland and when she was matriculating at the University of California, the train was how she traveled back and forth to school. Someone the family knew always traveled with her, no lady traveled alone in those days.

Once in a while we would be down there when a fast freight rattler would pass through. We always tried to count cars but rarely ever did we make it before the cabooses passed us by with a wave from the brakeman perched up in the window of his cupola. One of the best things to do was to read the names on the boxcars. Each one represented a far off place of the imagination. “The Pine Tree Route” all the way from Maine, The Saint Louis-San Francisco, “The Frisco,” outlined in big white letters on a red shield. Not a popular name with hoity-toity San Franciscans but OK with us. The big Railroad states were all there, the Pennsy, Texas Southern, New York Central, Baltimore and Ohio, the Milwaukee Road, The Dixie Flyer, the Cotton Belt and The Katy. You might get glimpse of less well known roads, their boxcars still in use long after they folded like the Delta-Yazoo RR, nicknamed the old “Yellow Dog” and memorialized in songs from the Delta Blues to Bob Dylan. The proud white mountain goat emblazoned on cars from the Great Northern, the SP and the UP, and AT & SF, immortalized by songwriter Johnny Mercer in 1946 and first sung by Judy Garland in the movie “Harvey Girls.”* We once saw a blue freight car emblazoned with Susquehanna Railroad on one end and a female figure holding a railroad lantern who said, “Ship with Susie Q,” get it?

Very so often you could spot someone standing in the doorway of a “Side Door Pullman,” going from somewhere to someplace, a Bo, a Knight of the Road, seeing the country, didn’t cost a dime neither. Perhaps one of the last of the throngs of men, women and children who drifted around the country looking for work during the depression.

It was altogether a marvelous place for little boys to hang around. The depot was closed permanently closed, passenger trains didn’t stop there anymore but you could climb on the old freight wagon and peek inside through the dirty dirty windows and imagine the days when it was busy with people preparing to go somewhere much more exciting than the place we lived. You could almost see the conductor wave his red lantern to signal the engineer to open the throttle and hear the full throated cry “All Aboard for Salinas, San Jose and San Francisco, and all points East.” The sound of the locomotive beginning to move, the deep, throaty cough from the stack, the hiss of high pressure steam, the metallic grinding of the drive wheels slipping slightly as she gathered way and the crash and clank of the couplers as the slack was taken out of the cars. Bystanders would invariably stand and watch until the caboose faded completely into the distance and sigh, they were staying home. People my age are the last generation who witnessed train travel when it still carried the mail, nearly all the freight and most passengers. The rise of the trucks and the airplane would nearly doom railroads by the 1970’s. Today the depot is a museum, the sheds are closed and the freight trains pass us by without even slowing down.