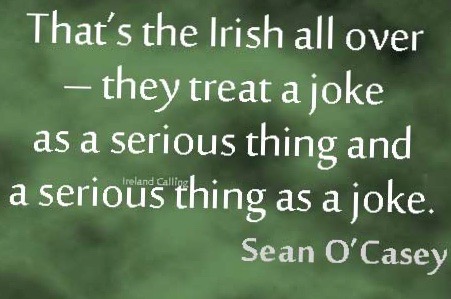 …Or the smell of Hells Kitchen.

Today is the day, Corned Beef and Cabbage is on the table, nested in a tasty berm of boiled potatoes and carrots. It’s the one day of the year when we eat to remember. To remember what was once a serious thing.

In the 1850’s the poor benighted Irish in New York were confined to an area in lower Manhattan known as the Five Points. It was the filthiest, evil, most run down section of the city with open sewers running down the streets and wooden tenement buildings dating back to the revolutionary war. The neighborhood, partly built on land which had filled in the freshwater lake known as the Collect Pond, was generally defined as being bound by Centre Street to the west, the Bowery to the east, Canal Street to the north, and Park Row to the south. The Five Points gained international notoriety as a densely populated, disease-ridden, crime-infested slum that existed for over 70 years. Five Points is alleged to have had the highest murder rate of any slum in the world. According to an old New York urban legend, the Old Brewery, built in the 1790s, was an overcrowded tenement on Cross Street housing 1,000 poor. iIt s said to have had a murder a night for 15 years, until its demolition in 1852. The famine Irish immigrants lived there.

“Debauched women, and men, and boys slink off to sleep, forcing the dislodged rats to move away in quest of better lodgings. Here too are lanes and alleys, paved with mud knee-deep, underground chambers, where they dance and game… ruined houses, open to the street, the reek of boiled cabbage and corned, ruined beef, hideous tenements which take, their name from robbery and murder: all that is loathsome, drooping, and decayed is here.” –Charles Dickens

Note that Dickens was long removed from tenement life himself and demonstrated his self satisfied views in his book written about his tours of America. He thumbed his nose at the Irish noting that the Five Points was far worse than the slums of London.

“They are a stupid, sodden, vicious lot, most of them being equally deficient in brain and virtue.” The average Irishman is a low, venal, corrupt and unintelligent brute.” Theodore Roosevelt.

Ireland itself was a major producer of salted meat, going back all the way to the Middle Ages and lasting through the 19th century. Under English rule, the vast majority of the products of Ireland were exported by the landowners. As to the the great famine itself, Ireland produced bumper crops of Beef, Pork and Wheat during the time Irish children were dying in ditches from starvation. One of the causes of the great migration is that tenant farmers were turned off the land in order to cash in on the export market.

“This [the Irish] is one race of people for whom psychoanalysis is of no use whatsoever.” – Sigmund Freud

It wasn’t always called corned beef, though. That didn’t come until the 17th century when the English coined the term. The “corned” comes from the use of large chunks of rock salt used in the curing process. These were know in England as corns. Pickled beef is the correct term.

“You can’t trust the Irish, they are all liars.”–Margaret Thatcher, British Prime Minister

While Ireland produced large amounts of corned beef, it was nearly all for trade. Corned beef was considered a luxury, and much too expensive for the poor Irish to consume. Instead, they relied on dairy and pork, especially salt pork, a relative to bacon.

Jiggs was born in Ireland. He came to this country expecting to find gold on the streets of New York, but found that he was expected to pave them with bricks and cobblestones instead. He became a hod-carrier. Romance came into his life when he met Maggie, a waitress at a small café, who put heaping dishes of corned beef and cabbage before him. They were married, and Jiggs became thrifty. Instead of carrying bricks, he bought and sold them on commission. Then he manufactured them. Street brawls in the old days in New York provided a great market for Jiggs’ bricks, which were harder than ordinary bricks. He grew rich. He still loved the corned beef though._____George McManus

The Irish use of corned beef as traditional Irish fare can be traced back to the 19th century and the Irish immigration to the U.S. While the newly immigrated Irish were used to eating salt pork back at home, its nearest counterpart, bacon, was prohibitively expensive in the Americas. Their best option for a lower-cost meat was, you guessed it: corned beef. What was once a luxury became a food that was now inexpensive and readily available. Cabbage was added because it was the cheapest of vegetables. No New York swell would deign to eat such a coarse vegetable, instead preferring the finest lettuce.

So it was the Irish-American consumption of corned beef that initiated its association with Ireland and the holiday of St. Patrick’s Day.

The real truth comes from Ralph Waldo Emerson who wrote, “Not paupers and criminals, but the Republic’s most needed asset, the wealth of stout poor men who will work.” Something that can be said of all immigrants.

My personal favorite though is from a man with a very particular set of skills, someone not to be argued with

“I’m Irish, so I’m used to odd stews. I can take it. Just throw a lot of carrots and onions in there, and I’ll call it dinner.” – Liam Neeson

As the quote at the beginning of this story written by that Dublin man, Sean O’Casey states,