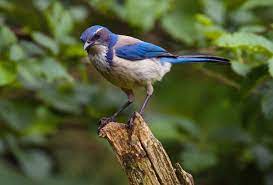 The California Scrub Jay is first of all not a Blue Jay. The Blue Jay is a completely different species and lives in the eastern part of the states. You can recognize one by its crest which is similar to the haircut of a Mafia killer of the 1930’s. It is greased straight back with a little tail. Like that. Peaky Blinders, though not for the same reason.

Here where we live we have the real deal, the official California Scrub Jay. Like a bunch of really smart birds he is a Corvid or Corvidae if you speak Latin. You all remember Kingdom, Phylum, Class, Order and all that other stuff you just pretended to learn in Natural History class unless you had Professor Ron Ruprecht. He’s the one that opens the semester by saying, “Since I was a small boy I always wanted to be a Herpetologist.” Thats fair warning that you are going to have a bumpy ride in a class you figured would be an easy “A.”

I have a pair that live in my big Oak. Each morning, early it take eight peanuts out to the back porch and place them on a small, red circular table for the birds to enjoy. I use my wedding ring to bang on the bronze handrail, three taps, two times and within a minute or two the the birds arrive.

According to the book male and female are indistinguishable from one another but being a completely untrained ornithologist I’m sure I can tell them apart.

You see, one of the Jays lights on the rail as soon as I step back two steps, give me a couple head bob’s by way of greeting, or so I think and then hops down to the table top, grabs a peanut, hops back up on the rail and flies off with his prize.

The other, who I’m sure is the female waits until I step back into the doorway, jumps onto the rail, head bobs and then scolds me. A lot more suspicious of any ulterior motive I might have such as Scrub Jay fricassee for example. After a bit she hops on the table then picks up two or three different peanuts, drops them, picks them up again spins around a time or two then almost always picks up the peanut she hasn’t touched and flies away, in a different direction than the male. That made no sense to me at first but I’ve learned they are likely piling the peanuts in stashes for later. They are paranoid that other Jays or Crows might spy them out so they hide them, even from each other. There is no limit to their caution.

Oh, and by the way she has a more pronounced set of feathers on her back that looks like a shawl. That’s what clinched it for me. She must be perpetually cold or waiting for it to be cold or even, no longer cold but why take a chance? Her feathers are touch more bouffant too which might resonate with those that went to high school in the sixties.

You see, it reminds me of going to Von’s. Men are hustling around grabbing two things and then heading for the express line to get out in a hurry. They are on the run from domesticity. They move as if someone has just thrown a grenade at their feet.

The women on the other hand pick up every single Zucchini for the full inspection, carefully turning it over and end to end for whatever reason I can’t imagine. As a farm bred boy who has packed more Zucchini than a dog has fleas, I would be willing to testify before a congressional committee and under oath too, that they are all the same. No Zucchini gets to the store without being inspected by the farmer, the picker, the packer, the shipper and the grocer.

The can in the back of the shelf is better than the can in front, the milk in back is fresher than the one in front though they were likely loaded at the same time. It’s a mystery to me.

This is meant to be funny of course though the observations are, I think valid, but it brings to mind the absolute complexity of life in all its forms and yet shows how individual traits are really not so individual. Observed behavior in something so simple as a pair of blue colored birds eating peanuts is reflected in the way Homo Sapiens act goes to show us just how interrelated we all are.

As we have styled ourselves Homo Sapiens Sapiens, we’ve done a disservice to all species for certainly all are Sapiens as the word means wise or astute in Latin. Just a tad arrogant on our part.

By the way, Jays are not really blue. The color you see is visible light reflected off their grayish brown feathers. When light touches tiny pockets of air on blue jay feathers, the full color spectrum of light is absorbed except for blue, which is reflected in the light. Thats what the eye sees and the brain records.

I had thought to name them but then it occurred to me that they must have names already. Bird names, family names passed down generations, so I’m going to leave that alone. I do know though, that my dogs real name is Zordax the Tan, barker of great volume.

Isn’t it all marvelous?