Farmers are outdoor people. They live by the rhythms of season. So we learned from our father the importance of weather. My dad lived more outdoors than in. No matter the weather, he was up and out of the house at dawn. Be it the promise of a hot August day, an April morning dripping fog or a dark winter day of pouring rain.

On the wall of our kitchen my dad always had a barometer. The thermometer was outside the back door.  We had no meter for the dew point but the humidity you could feel on your skin. In the early morning, observing the moisture on a plants leaves and even the smell of the air could be interpreted to predict the weather. The wind from the south meant rain, from the northwest meant it was clearing. The daily crop report on the radio could help a farmer see a little bit into the future. Calling the  brokers at the  San Francisco  wholesale vegetable market and asking about the bay area conditions was a help. At Mow Fung produce on Grant Avenue in Chinatown, they could just look out the window and give you a forecast. I know a farm family who called their cousins in Salinas for the same reason.

Farmers are all gamblers. They are the greatest of optimists. For my dad bet the farm on the weather and the markets every day of his working life. An entire summers investment and work could be wiped in an early morning hour by frost or rising waters from the same creek that fed his crops.

When you are a kid every day holds the promise of some adventure. Rainy winter days were the most exciting, frought with the possibility of perhaps, some disaster.

As little children we were eager listeners when family told stories of creeks flooding. The Arroyo Grande going over its banks, drowning crops under layers of mud carried down the creek from the High Mountain area above the Ranchita, Huff’s Hole and upper Lopez canyon. Joined by Tar Springs creek just below Gulartes, the careening water would swirl, twisting in upon itself while parts of broken trees submerged and resurfaced like wooden submarines. Through the narrows at the Harris bridge, close by the Machado’s and the Gregories, the sound carried to our home almost a mile away. A rumbling, low bass,  with a curious rhythmic pace, things being torn apart and slammed together with terrific violence.

My father sitting in the semi-darkness, smoking and drinking coffee, worried over the rise   of the waters, a scene mirrored in other kitchens as farmers throughout our valley waited for  dawn to see the how high the creeks were. Bundled up in our coats and riding the front seat of the pickup, warm and snug against my dad, we rode the dawn patrol as he made the rounds of all the turnouts where the water could be seen. Cecchetti’s bridge crossing, The Harris bridge, under the spans at Mason and Bridge Streets and the crossing at the site of the Cienega school, hard by the old Oliver Taylor house. The photo above, taken in 1954, clearly shows the concern on my fathers face as he watches the flood waters just above the old highway 1 bridge. The water is just below the top of the dike and Ed Taylor’s ground is just on the opposite side of the creek. Ed is listening to John Loomis who is pointing just upstream where the flood is about go over the bank.

The Arroyo Grande, The morning after, 1914. Crown Hill in the background

Groups of worried farmers gathered at each turnout to assess the damage and speculate whether the water was rising or falling. This was no academic exercise. If the creek rose enough to top the banks, farm fields would flood. Crops could not recover, either drowned or covered with a slurry of mud, choking them to death. Any part of the valley which had heavy soil, such as the Dune Lakes area, could take months to dry making it impossible to farm at all.  To the farmers on the ground which made up the old La Cienega Rancho, flooding was a disaster of the first order. The ranch that was Spencer Record’s, the Taylor acreage, could be destroyed in a few minutes for once she was over her banks there was no stopping her. Witness the washout at Branch Street in 1914 created by the little creek out of Corbit Canyon. Imagine the effort it took to replace the ground in the days before powered machines. Every bit of the dirt was brought in by horse and wagon, one shovel full at a time. 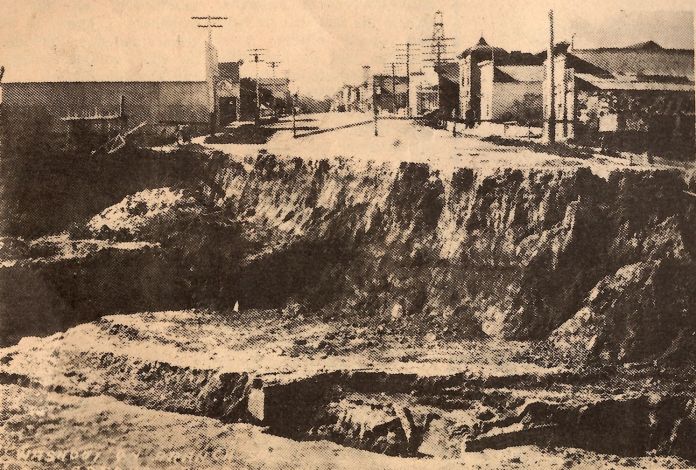 1914, looking down Branch Street, the old Herald building first on the right.

In those days, the flooding creek literally plowed it’s way downstream, rooting out the willows and sometimes entire Sycamore trees which scoured the undergrowth along the banks, cleaning the channel for its entire length. In the days before the dam was built this was an annual cycle that allowed a free flowing stream in the summer and fall where swimming and fishing  in the farmers dams was an annual sport for boys and girls who ran free like semi-tamed animals, migrating up and down stream as they would. At our place it was the dam behind our farm, or George Cecchetti Senior’s just above the bridge where we would go after school. It is still today, a short downhill coast from the old Branch school to the creek. Town kids swam at the gauge below the old high school, just above the old railroad bridge. Most of us learned to swim this way.  And of course we weren’t by any means the first. Generations of Arroyo Grande kids once swam there. My grandfather Jack Shannon told stories of swimming in the slough at the foot of Printz Road. Arch Beckett’s lake it was called. My dad and uncle had a small hole on Shannon Creek near where they lived. 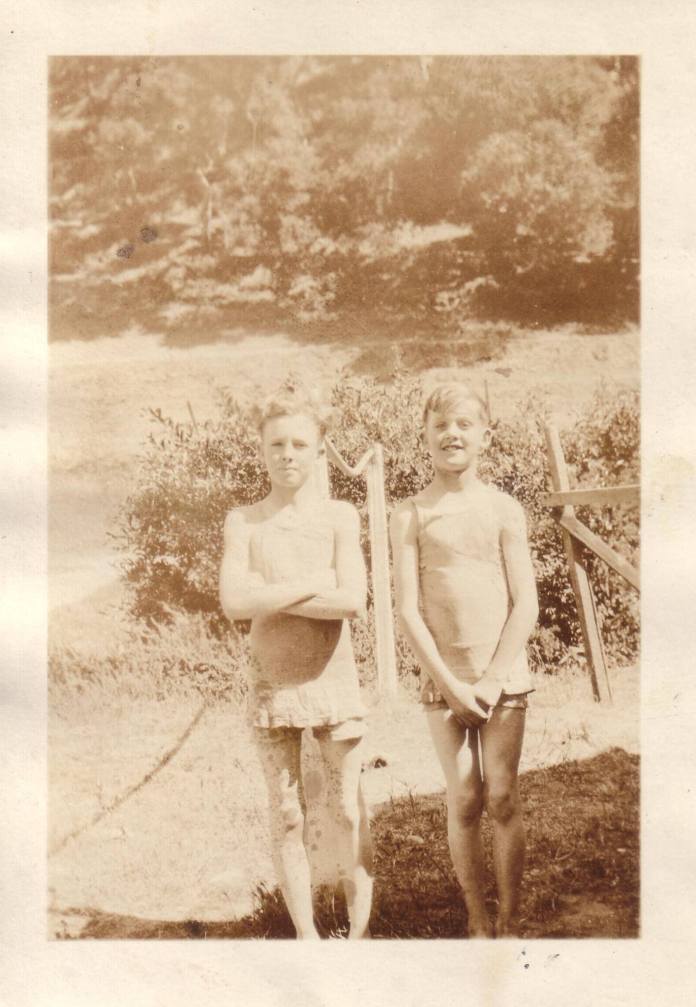 My uncle Jackie on the left and my dad on the right, taken in the front yard of my great-grandfather’s house on the old Nipomo  road now known as El Campo, about to set out for a dip in 1920. You can just see the gravel drive at the left and the bushes along the little creek. Today this flows behind Arroyo Grande High School where it was re-routed when the Poole tract was built in the 1930’s. It could be just as well be my brother and I, 35 years later.

I can still remember Hazel Talley, in our kitchen talking to my mom about how frantic she was when her oldest son Donald, went down the creek with Bob Rowe, leaving from the Rowe’s house, putting in at the creek on the Waller’s farm and racing downstream to the ocean in an inner tube during a big flood year in 1959. The flooding creek was a meat grinder of logs, whole trees, old car bodies and whatever kind of junk had been thrown in it. Poor Hazel could just imagine what could have happened to her son, who of course, being a boy, thought only of the adventure.

High water above the highway 1 bridge 1954

We have lost this annual cycle to the dam. Water no longer flows in the summer or winter. The creek is choked with willows and wild blackberry woven together in an impenetrable matt by poison oak vines. Children no longer play in their fathers little ponds and todays farmers needn’t agonize through the night wondering if their fields will be there in the morning. Safer, yes, but what has been lost to us is irreplaceable. Fish no longer swim upstream for little boys to catch and even though our fathers disasters can no longer be, there is a certain sadness here.

One thought on “Rainy Day”