Life time in a box. Each of us have them. Those old shoe boxes in a closet, a seldom used drawer or behind the linen in the guest bathroom. My grandmother Annie Gray Shannon had them too. As a child, when I stayed over I would pull them from the shoeboxes she kept them in and wonder who those people and places were.

When she died my dad and uncle sold her ranch and moved out, cleaning the house and emptying the barns of three generations worth of accumulations, most of it to the dump.

My dad was not a sentimental man. His heart was focused solely on his family. People were everything, things meant little to him. The only personal items he kept were his Cal Berkeley beanie and a small bar of gold he used for a paperweight. One he earned and one he purchased, the only thing I can remember he bought just for himself.

I’m different that way I guess. When we went to clean out the house things were just as they always had been, my grandfathers little toothbrush holder on his dresser, Annie’s clothes still in her closet. Her dressing table with its hair brushes, hand mirror and powders just as they had always been. The room still smelled of her. White Shoulders. The memories of her were overwhelming and I found myself sobbing for all I had lost, never to  touch or hold again.

The cleanup was fast and furious, my dad and uncle Jack just wanted it to be over and the pickups were loaded and made their trips to the landfill. Few things were kept, my grandmothers sterling and china made the cut as did the little teacup my grandfather had salvaged from the debris of the Red Front store on the day of the great San Francisco earthquake. The shoeboxes disappeared.

Years later my Uncle Jackie collapsed on his ranch in Creston and was hospitalized with a lung infection which would ultimately prove fatal. Again the move out. The house and grounds needed to be cleaned in order to rent the property and pay the bills. Jackie didn’t have much, some old clothes, the bed he had slept in for three quarters of a century and two old John Deere tractors. On his dresser, a photograph of his mother and another of his parents wedding day.

But, in the back of his closet buried under a heap of old worn out clothes, a square, black cardboard box. Inside were the old photographs and letters that had so fascinated me as a child. An unintentional gift for sure but one of inestimable value.

The problem, how to interpret the things in it. As grandchildren we knew little about the real lives of our grandparents and as with most young people never really thought to ask. Almost none of the photographs had anything written on the back. Who were these people? Did we know them? What occasion demanded the taking of a picture? In going through the contents the first thing you notice is that the photographic paper can be quite different. Some is heavy stock and others are so thin as to be very fragile. Formal photographs taken for graduations or school class pictures may have the name of the studio printed on them or perhaps the schools name, teacher or the year in which they were taken.

Just like tracking any story, clues have to organized into an understandable narrative. The photo below was at the bottom of the box and though I’ve had it for some time it just recently scanned, cleaned up and really viewed for the first time.

My grandfather is on the left, Annie Gray and an unknown couple on the right, or perhaps not so unknown that I won’t figure it out. We have enough old family photos from this time which feature both the same boy and girl.  The building is a post office somewhere. What can we deduce from what we see. My grandfather, Jack wears a morning coat, or Jaquette, with a standing, detachable starched collar and tie. Beneath the coat you can just see a waistcoat, or vest as we would say today. He wouldn’t be wearing a belt, but suspenders to hold up his cuffed trousers. His is wearing what looks, at first glance to be pointed cowboy boots but what were, instead high button shoes. The hat is a straw derby which means that it’s summer time. To drive the point home, the other man wears a straw boater which was never worn in spring or summer. So far, so good.

This photo is quite small and printed on very thin paper stock. I remembered that there were other similar pictures somewhere in the collection so I pulled them out and began comparing them and sure enough there were more than one in which one or all of these people appeared. The  photo was taken at the end of Main street in Pismo Beach. The old Pizmo Inn is in the right background. 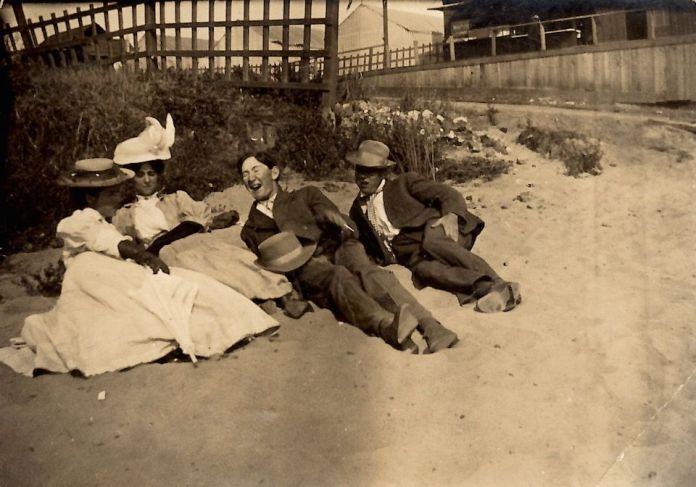 The three on the left are the same people as the preceding picture. The girls wear the same clothes as before except for the white hat, and the boy laughing is certainly to same though he has a different hat this time. Same day? We can suppose but we don’t know. We do know that the clothes she wears are the same as in the photo below complete with the umbrella, hat  and gloves

A little more research finds that the building pictured in the first photograph is the first Pismo Beach post office which burned to the ground in 1905 which puts the pictures around 1904. That would make my grandparents 19 and 22 years old, still four years before their marriage in 1908. My grandfather lived in San Francisco then and my grandmother was about to start her first year at Cal Berkeley. He must have been home on a visit and being a nice day, they went to the beach.

One of the fun things about this little photo is that our family story tells us that there was never anybody else for the two of them, ever. If you take the time and period into account they are standing just a little to close to one another. There is, perhaps a little touching of hands behind the back. I’d love to think so.

He wrote in her little autograph book that she kept for parties and special occasions. “Friend Annie, The flowers of the forest may wither, the lilies of the valley may decay, but friendship shall blossom forever, when all other things fade away. Your friend, John Shannon  December 7th, 1898.” He was 16, she 13.

This picture is their official portrait when they were the Grand Marshal’s of the Harvest Festival in 1961, their second time as such. They had been married for 53 years. They would make it to 68 before he left her. They are still standing close enough to touch. Sweet.