The earliest memories are of sights, sounds and smells. The constant heady smell of perked coffee, the sound of the old radio tuned to the crop reports and the seasonal odor of the crops my father grew. The sweet smell of the celery ripening in its orderly rows, an otherworldly emerald green, its leaves riffling in the wind as the breeze followed the retreating fog of a morning. 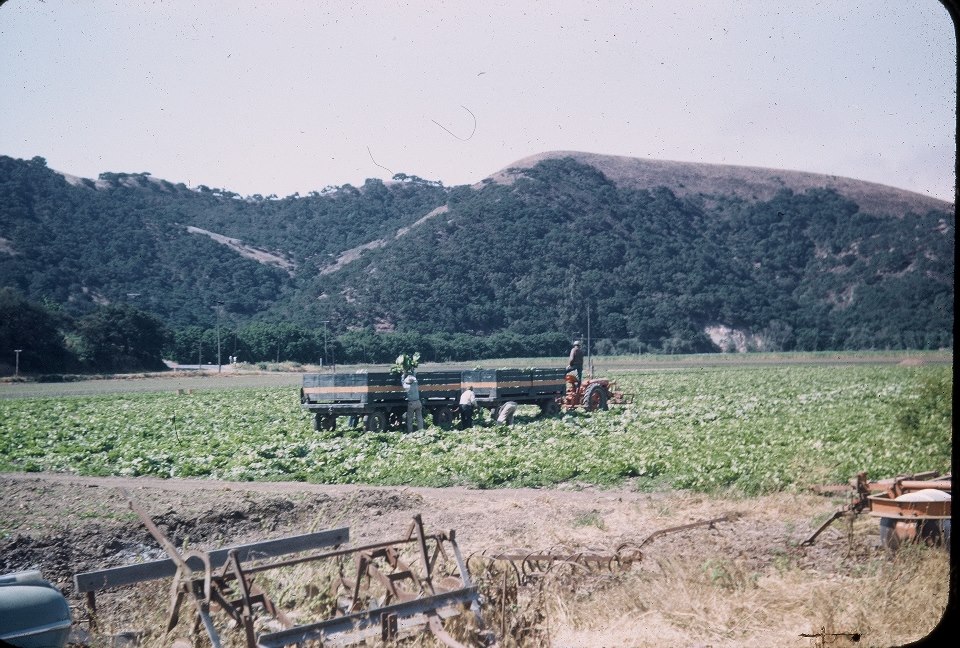 Cutting Romaine with the four corners in the background.

Our little home was just a half mile from the four corners, the crossing of Branch Mill road and Huasna road.  No one knew when it was built but certainly in the day when foundation were simply posts dug into the soil and a floor built upon them. This gave it the curious quality of adapting, each year, to the weather. If it was a particularly wet year the house might lean in any and all directions, causing the doors to stick in their frames. My father had an old hand plane which he would laboriously use to plane them enough to work again. After decades of trimming they took on the appearance of lozenges, not quire matching the parallelograms they were hung in. As wood ages it grows harder and a dull old plane thrown in the tool shed for a year at a time can’t remember when it was last sharpened.

My father, bless his soul was not a mechanically minded man which may seem strange for a farmer but such was the case. Dad had two things to adjust those doors, he used the only quasi swearword I ever heard him use, SB and that old plane.

There was a time when I was still young enough to ask what SB meant and my dad pointed to the mud flaps on our neighbors red flatbed truck which were branded with those letters and said, quite simply, “Silva Brothers.”

I can’t recall a single farming family we knew who ever used the front door. It was our back door that was the real entry. Always the screen door, held shut by a spring whose slamming announced coming and goings. Anyone who used the front door was held to be slightly suspicious, obviously not knowing the proper protocol for entry. You might simply be ignored until you went away. Another thing not allowed was blowing the car horn to get my dad to come out. If you wanted a job, you were already scuppered, you couldn’t ask if no one came. He would make you wait until, as he said, “Hell froze over.” This was how some lessons were learned, when you are asking a favor, be polite.

We also learned how important body language was. My dad could see you from the kitchen when you drove up and parked. A man who hustled from the car to the screen door, the correct one remember,  gave a firm knock would surely be hired if there was a job available. “A man walks the way he works” he said. Something I have found to be true.

My dad was born in 1912 and began working as a small boy of seven. My grandparents had a dairy and the kids were expected to pull their weight every day. Milk cows don’t take Sundays or holidays. He grew up in the twenties and thirties, graduated college in 1934 at the deepest part of the depression and went right back to ranching and farming. At the kitchen table we learned that you judged a man by how hard he worked. My dad took a great deal of pride in this ability to produce. This was a common thread running through those kids that lived through the depression and WWII. Don’t shirk, don’t show off, don’t put on airs, say what you mean and mean what you say. His word was his bond. Dad never preached, you learned by observing and asking questions which is how he wanted it to be.  This was what we learned in our kitchen.

7 thoughts on “Lessons At The Table”